During the 2019 Rye Tour to Finland and Latvia, our guide in Helsinki, sourdough baker and author Eliisa Kuusela, arranged a visit – actually two (of which more in a bit) – to Leipomo Halme, a 120 year-old bakery in Espoo, about 30 minutes northwest of central Helsinki. END_OF_DOCUMENT_TOKEN_TO_BE_REPLACED

My weakness for Baltic rye breads took over when I found this recipe in a Polish blog. Just to set the scene, Palanga is a coastal resort in western Lithuania, on the shores of the Baltic whose white sand beaches attract tourists from all over Europe, especially Poles and Germans. I suspect that this bread, which is lighter in both color and flavor that the other Baltic ryes I’ve encountered, is intended to appeal to the tastes of the town’s economically important summer visitors. Instead of the wholegrain rye flour that’s commonly used in Baltic breads, this one uses Type 1150, a much lighter blend that can be approximated by mixing 2/3 medium rye and 1/3 white rye. END_OF_DOCUMENT_TOKEN_TO_BE_REPLACED

Rye and apples – what could be better for an autumn bread – but in a wooden frame? END_OF_DOCUMENT_TOKEN_TO_BE_REPLACED

This one is a different. END_OF_DOCUMENT_TOKEN_TO_BE_REPLACED 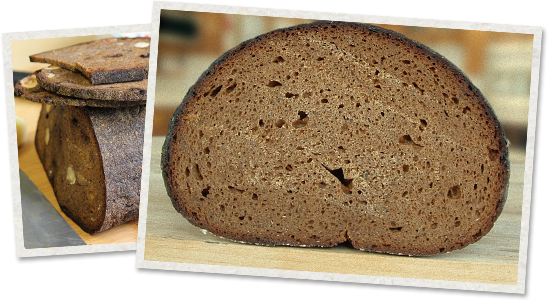 NOTE: I first met John Melngailis at Bread Furst, James Beard winner Mark Furstenburg’s Washington DC bakery. Mark had been kind enough to arrange for me to appear at the bakery to publicize The Rye Baker, and invited John, whose love of his native Latvian rye breads prompted him to found Black Rooster Food and start baking them commercially. Needless to say, John and I hit it off immediately, spending a good part of the morning talking about the marvels of Baltic rye. He was also kind enough to bring me a loaf of each of his breads — dense, sweet-sour rupjmaize, and a triangular loaf of his fruit-and-nut holiday bread, both of which were extraordinary. So when John sent me this essay on his relationship with the bread he loves, I simply had to share; it’s a fascinating read. END_OF_DOCUMENT_TOKEN_TO_BE_REPLACED

END_OF_DOCUMENT_TOKEN_TO_BE_REPLACED

If there’s a rye bread equivalent of the Perfect Storm – that is, when all the ideal conditions come together at the same time – this bread is it. Start with the formula for a classic South Tyrolean Merano Rye from Austrian master baker/blogger Dietmar Kappl, then use it to showcase two spectacular artisan flours – California-grown Abruzzi rye from Grist & Toll and organic heritage emmer from Maine Grains – and you come up with a bread that’s very, very special. END_OF_DOCUMENT_TOKEN_TO_BE_REPLACED

Deli rye – that light, open-crumbed, caraway-fragrant New York classic – is what most Americans think of when they hear “rye bread.” Without getting into the rightness or wrongness of that fact, deli rye is without question the bread to wrap around a thick layer of pastrami, corned beef or pickled tongue – with or without Swiss cheese, cole slaw, sauerkraut, mustard and/or Russian dressing. So when my wife went shopping one morning and came back with a package of heavily peppered, deep pink pastrami, there was no question about how we were going to eat it. END_OF_DOCUMENT_TOKEN_TO_BE_REPLACED

The search was worth the hassle: this is a bread that combines the robust flavors and mouth-feel of coarse rye meal with the moist crumb of a stale-bread soaker and the intense sour of an 18-24 hour sponge. END_OF_DOCUMENT_TOKEN_TO_BE_REPLACED