During the 2019 Rye Tour to Finland and Latvia, our guide in Helsinki, sourdough baker and author Eliisa Kuusela, arranged a visit – actually two (of which more in a bit) – to Leipomo Halme, a 120 year-old bakery in Espoo, about 30 minutes northwest of central Helsinki. END_OF_DOCUMENT_TOKEN_TO_BE_REPLACED

Recently, someone asked me for advice on how to get their cookbook published. On rereading my response, I thought that others might find it helpful, so here goes:

END_OF_DOCUMENT_TOKEN_TO_BE_REPLACED

During my first full day in Riga, I had lunch with Ieva, who helped me plan the 2018 Baltic Rye Tour. We met at a traditional Latvian restaurant nestled by a cobblestoned street and surrounded by 18th century buildings in the Old City. As we discussed the itinerary, which centered on Riga and southeastern Latvia, she said, “You should really go to Kurzeme (Latvia’s western province). They make these wonderful rye tarts filled with carrots.” I sipped my beer and filed the thought away for further consideration. END_OF_DOCUMENT_TOKEN_TO_BE_REPLACED

One of the breads I discovered on Baltic Rye Tour 2018 was this simple and lovely Finnish malt bread. I first tasted it at the Wi-Box Bakery in Raseborg, on Finland’s southwestern coast, where Swedish influence is very strong. It was an immediate hit, not just with me, but with all 18 members of our jolly band of bread nerds. END_OF_DOCUMENT_TOKEN_TO_BE_REPLACED 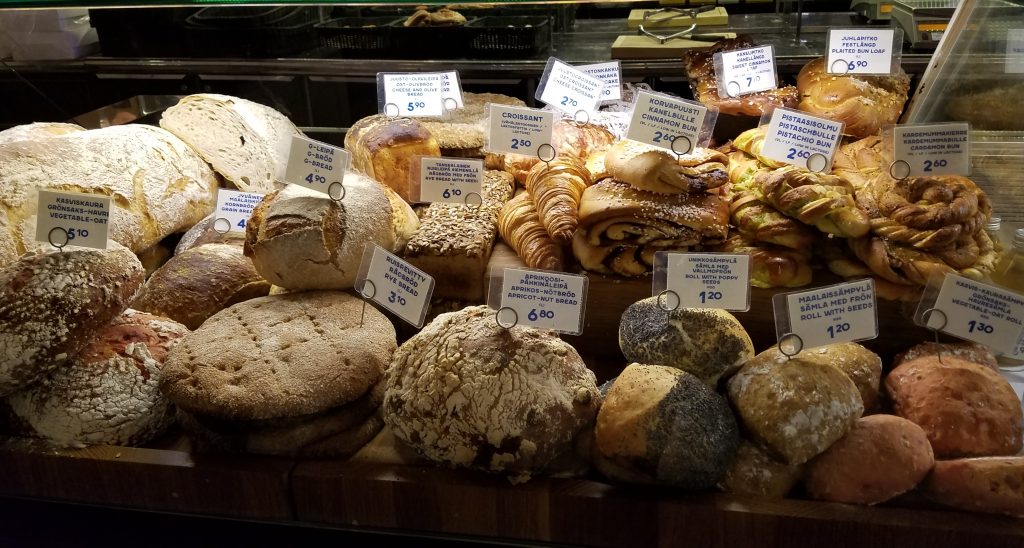 It’s been a couple of weeks since my return from The Rye Baker Baltic Rye Tour 2018 – enough time for the impressions and memories to mellow and integrate and for me to gain some perspective on a whirlwind of sights, sounds, tastes and human interactions. In all, we were 18; most of us dedicated bread nerds, both professionals and home bakers, united in our desire to experience rye on its home turf and hungry to expand our knowledge of the unruly grain. END_OF_DOCUMENT_TOKEN_TO_BE_REPLACED

On September 25, 2018, I’ll be leading a group of up to 20 bakers and bread enthusiasts on a 12-day bakers’ tour of coastal Finland and Latvia. We’ll explore the cities and countryside, visit farms and mills, meet with national bakers’ associations. And, most important, we’ll learn from the bakers who produce some of the world’s finest rye breads. For details, visit the tour website. END_OF_DOCUMENT_TOKEN_TO_BE_REPLACED

My weakness for Baltic rye breads took over when I found this recipe in a Polish blog. Just to set the scene, Palanga is a coastal resort in western Lithuania, on the shores of the Baltic whose white sand beaches attract tourists from all over Europe, especially Poles and Germans. I suspect that this bread, which is lighter in both color and flavor that the other Baltic ryes I’ve encountered, is intended to appeal to the tastes of the town’s economically important summer visitors. Instead of the wholegrain rye flour that’s commonly used in Baltic breads, this one uses Type 1150, a much lighter blend that can be approximated by mixing 2/3 medium rye and 1/3 white rye. END_OF_DOCUMENT_TOKEN_TO_BE_REPLACED

Rye and apples – what could be better for an autumn bread – but in a wooden frame? END_OF_DOCUMENT_TOKEN_TO_BE_REPLACED

This one is a different. END_OF_DOCUMENT_TOKEN_TO_BE_REPLACED